While looking for simple stocks may sound tedious to some, finding clear, unmistakable, and simple megatrends could seem more achievable. The idea behind this approach is straightforward enough: Identify a megatrend, and then seek out a company that’s capitalizing on that very shift.

Is the concept of streamlining the process between product idea and business creation fundamental to the global economy? Consider Shopify (NYSE: SHOP).

Think digital advertising of any kind is here to stay? Take a look at The Trade Desk (NASDAQ: TTD).

Will cybersecurity only become more critical in an increasingly technological world? Try CrowdStrike (NASDAQ: CRWD) on for size.

All of these companies are major players in their respective fields — but their growth has likely only just begun. Adding $100 to these three stocks could be a simple way to beat the market over the coming decades. So, let’s take a deeper look.

While Shopify’s vast business-building ecosystem is relatively complex, its mission is simple: The company strives to make commerce better for everyone. Regardless of an entrepreneur’s idea, Shopify’s platform of commerce-enabling solutions expedites the steps between product creation and selling globally.

Shopify’s omnichannel platform — which spans fulfillment services, international sales, and payments — is beloved by its users, as demonstrated by its Net Promoter Score (NPS) of +43, according to Comparably. NPS rates on a scale of -100 to +100, with a positive number meaning that a company has more net promoters than detractors of its products or services. Shopify’s fantastic +43 mark demonstrates that the company does a great job of simplifying the tedious task of moving from a product idea to a fully-fledged business. Before this year, the market seemed to agree with this assessment, having sent the stock up over 6,000% from its IPO price.

However, Shopify’s stock has struggled mightily in 2022 due to concerns over its decelerating growth. Investors were disappointed to see year-over-year revenue increase by “only” 22% during the first quarter of 2022, when the company brought in $1.2 billion. Yet on a two-year basis, Shopify sales grew by 60% annually, thanks to the massive spike seen during the pandemic — making the 22% growth in the last quarter impressive, considering the previous quarter’s comparables.

With Shopify beginning to integrate its $2.1 billion purchase of Deliverr and its end-to-end logistics platform, further stock turbulence may be incoming as management looks to reinvest current cash flows into the business rather than building profitability. 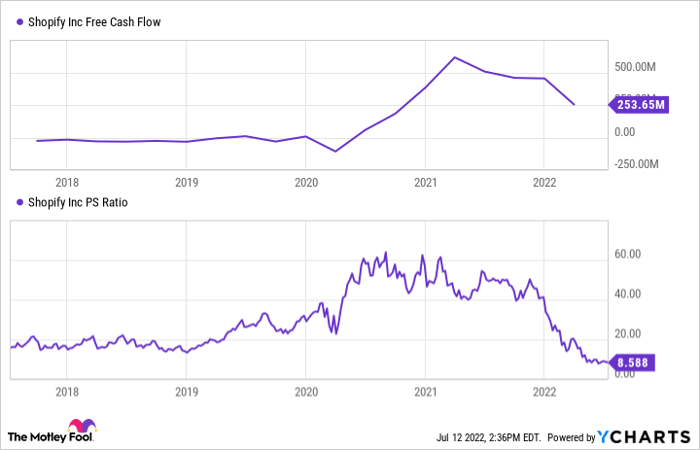 However, trading near an all-time low price-to-sales ratio, Shopify’s complex platform looks like a simple investment thesis for investors to profit alongside.

The Trade Desk’s digital ad-buying platform may be one of the simplest investment ideas for investors to consider as the world shifts more and more into the digital realm. Over the next five years, Statista expects global spending on digital advertising to grow by 11% annually — potentially reaching $1 trillion by 2030.

Such growth is spurred by a massive shift in advertising spending, which is transitioning from linear TV to the connected TV (CTV) or streaming industry. As streaming platforms toy with or actively consider ad-supported pricing tiers, The Trade Desk is well-positioned to thrive: The company reaches 90 million households and over 120 million CTV devices.

Best yet for investors, a recent deal between The Trade Desk and entertainment juggernaut Disney shows that this advertising shift is already underway. Disney aims to automate roughly 50% of its ad buying over time; thanks to The Trade Desk’s automated ad-buying capabilities, the partnership seems like a natural pairing.What’s more, Disney can now match up its customer data with The Trade Desk’s Unified ID 2.0 framework, an email-encrypted alternative to the third-party cookies that have fallen out of favor due to privacy concerns.

This promising partnership comes as The Trade Desk has grown revenue by 43% year over year in the first quarter of 2022, raking in a record $1.2 billion in revenue. Yet, The Trade Desk’s stock has dropped by around 50% year to date. And, due to recently inflated stock-based compensation, the company has seen its net income dip into negative territory.

And, as illustrated in the below chart, The Trade Desk’s net income has dipped into negative territory due to recently inflated stock-based compensation. However, looking a year ahead on a forward price-to-earnings basis, The Trade Desk only trades at 46 times earnings — an intriguing valuation, considering the simple yet massive trends working in its favor. 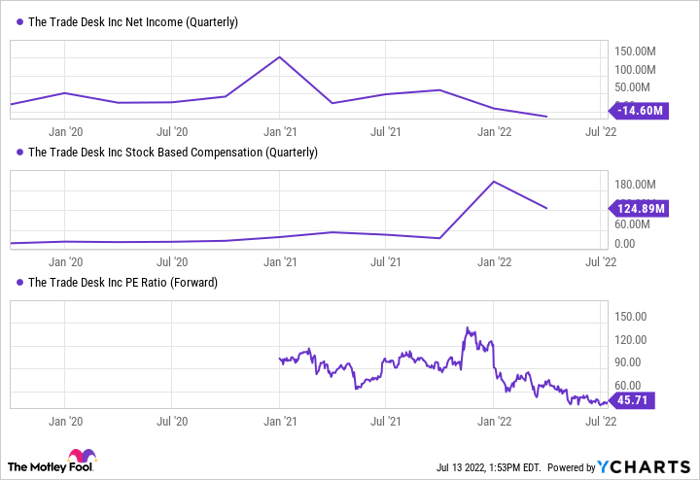 While endpoint cybersecurity isn’t what most would think of when thinking of simple stock ideas, the industry should only grow in importance as the world prepares for many fast-approaching technological advances. Consider that Grand View Research and Statista expect 12% and 10% growth rates for the cybersecurity industry over the next few years. Thanks to this promising growth potential, CrowdStrike’s expansion may only just be starting, despite rising over 200% since its 2019 IPO.

Through its 22 cloud modules, CrowdStrike has developed a one-of-a-kind platform that sees incredible network effects as it grows stronger with each new customer it adds. Thanks to its nearly 18,000 clients — including 65 of the Fortune 100 — the company streams trillions of data signals to its proprietary Threat Graph weekly. This data horde allows for continuous protection and analysis while enabling breaches to be stopped rapidly.

In addition to its impressive list of current customers, Crowdstrike boasts a 98% gross retention rate and a 123% dollar-based net retention rate. These figures mean that the company not only keeps nearly all of its current clients, but that it also grows sales within its existing customer base by 23% annually — marks that are above average for software-as-a-service stocks.

Despite trading at 24 times sales, CrowdStrike’s 64% year-over-year revenue growth for Q1 2023 and analysts’ projection for 52% growth in full-year 2023 point toward the company outgrowing this valuation over time. While Crowdstrike currently trades at around $175, investors could purchase fractional shares or add $100 to current positions in this simple stock, and prepare for impressive long-term returns.

10 stocks we like better than Shopify
When our award-winning analyst team has a stock tip, it can pay to listen. After all, the newsletter they have run for over a decade, Motley Fool Stock Advisor, has tripled the market.*

They just revealed what they believe are the ten best stocks for investors to buy right now… and Shopify wasn’t one of them! That’s right — they think these 10 stocks are even better buys.

Wed Jul 20 , 2022
Officials with the Transportation Security Administration (TSA) hosted a media day at Palm Springs International Airport today for first looks at how their new technology is supposed to make travelers’ security checkpoint experience more efficient. This new technology is called Credential Authentication Technology (CAT) and it has a two-part component. […]